All Collections
Google Data Studio Connector
Troubleshooting
What does this Data Studio error mean and how can I fix it?

What does this Data Studio error mean and how can I fix it?

Common errors in Data Studio and how to avoid them

Written by Viktor Tell
Updated over a week ago

In this article we list the most common errors that our users report seeing when using our Data Studio Connector. We will do our best to explain what they mean and our suggestions for how to avoid them.

Before you start applying the suggestions below make sure you try the basics; refresh data, refresh fields and reconnect the data source. Instructions for how to do this can be found in the article Google Data Studio troubleshooting steps.

A few words on quota limits

Funnel and Google, (like any service provider with a lot of traffic) implements restrictions on how often a service can be used within certain time frames by the same entity. This is called quota limits. A user that is causing an unreasonable large load on a service risk degrading the performance for everyone else. Quota limits filter out traffic that is using the service beyond what is considered fair usage.

Google have a quota limit per Google user and day. This quota is shared between services like Data Studio, Google Sheets and Google Calendar. You can read more about these limits in the Google Apps Script documentation.

Funnel use a quota limit per Funnel Account, and it's shared across many of our features like the Data Explore, the Data Studio Connector and Data Warehouse Shares.

Most common errors in Data Studio

"Service invoked too many times in a short time: exec qps" 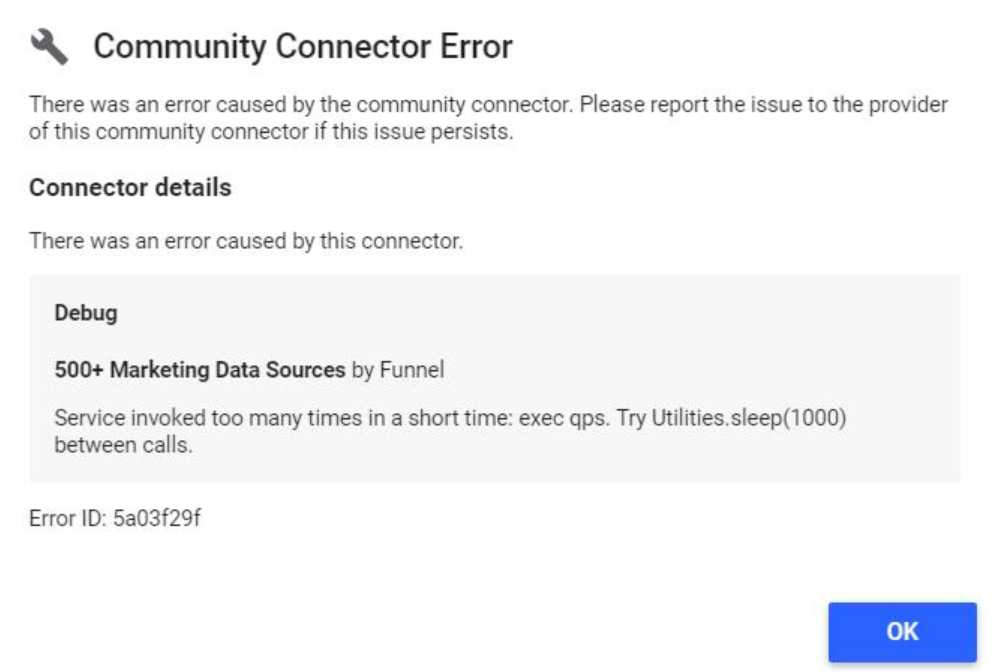 You've hit a Google quota limit with too many requests in a short time. From Google's documentation; "This indicates that the script called the given service too many times in a short period".

The error message can happen if the same Google user is doing heavy calculations either in Data Studio (blends, custom fields, filters) and/or using Google Sheets with many custom functions as a data source in the Data Studio Report.

"Service invoked too many times for one day: urlfetch"

You hit your daily Google quota limit. From Google's documentation: "This indicates that the script exceeded the total allowable execution time for one day. It most commonly occurs for scripts that run on a trigger, which have a lower daily limit than scripts executed manually". Specifically, it means that the Google user have had more than 20 000 data requests per day across the different Google Services.

You hit a Funnel Account quota limit. The amount of work required to satisfy all the queries that are being made from a single Account in a 60 second period is higher than our limit, some of the requests are being throttled.

"Too many rows, try using a shorter date range or fewer dimensions"

You hit a Funnel quota limit. The query would result in too many rows and was therefore aborted, this is done for performance reasons, and to avoid sending huge or incomplete responses.

We believe this to be a Data Studio bug and have reported this in Google's issue tracker.

Some users have reported success by trying the following:

This error message points to an error within Google Data Studio. The request never reached Funnel so we don't know any more details than what is shown here.

Some users have reported success by tinkering with the following:

Please reach out via the in-app support chat or send an email to support@funnel.io. For us to give you the best possible help we refer you to the article How to report a problem. We'll do our best to help and will update this article with new common errors and how to avoid them as we learn more.